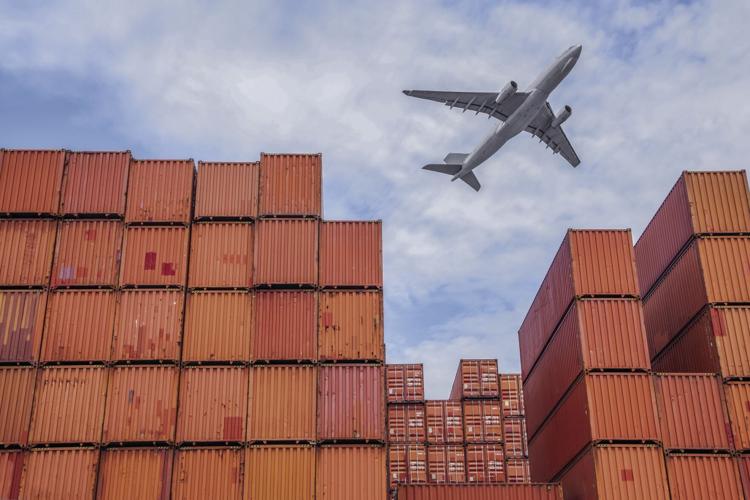 China is the top export country for Oregon, followed by Canada and Malaysia. 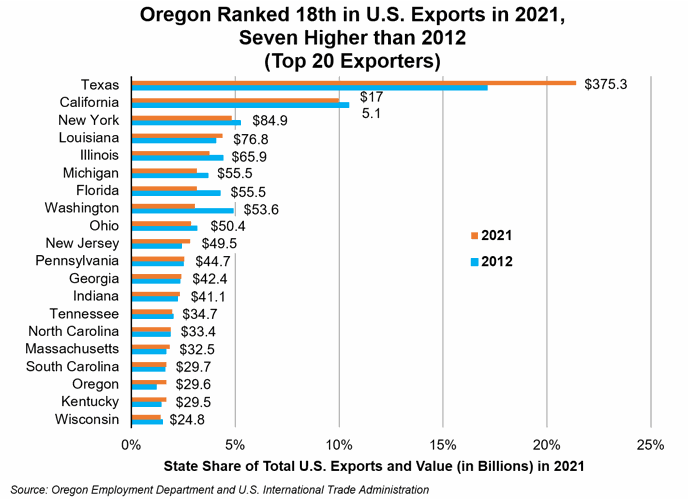 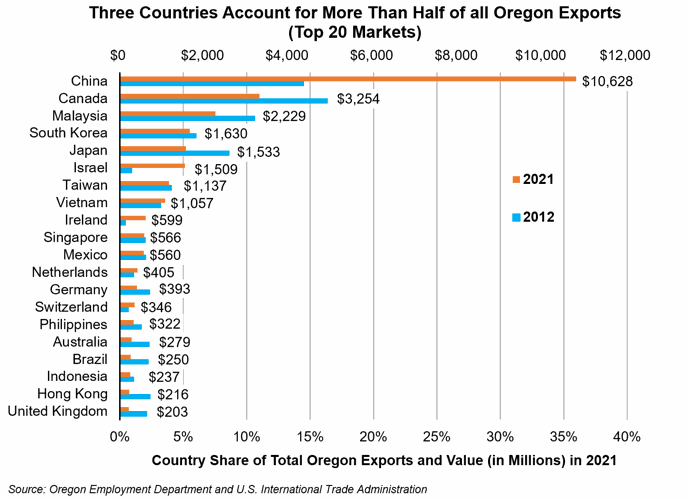 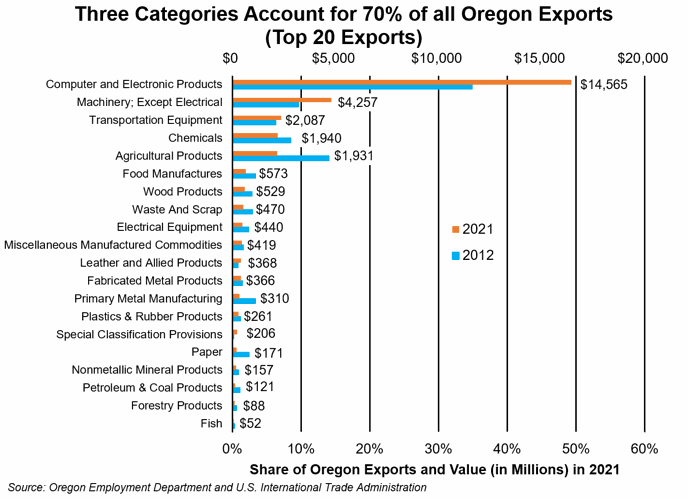 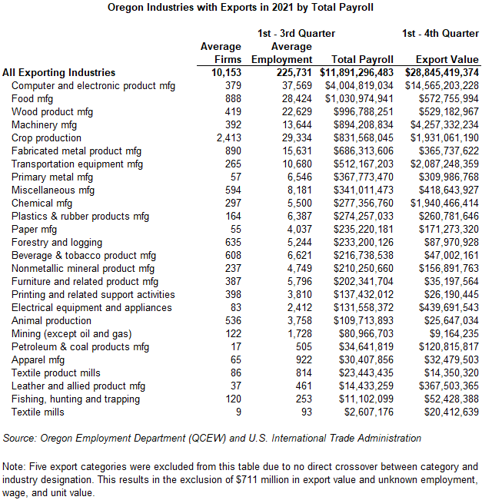 Products made in Columbia County and across the state and exported continue to sustain local employment and remain a key economic driver.

As might be expected, two of the nation’s largest states accounted for the two largest shares of exports: Texas at 21.4% and California at 10.0%.

Canada, Mexico, and China purchased a combined 41.9% of U.S. goods and services sold in the international marketplace. Canada was the most favored export partner with Mexico as a relatively close second. China took the number three slot with Japan number four. South Korea barely edged out Germany to round out the top five. Canadian businesses purchased $307 billion (17.5%) worth of U.S. goods and services sold outside the states in 2021. Texas was the top supplier, shipping 9.4% of Canada’s U.S. imports. Oregon fell in at 25th, shipping 1.1% at a value of $3.3 billion. Oregon’s top export to Canada was transportation equipment, which accounted for 25.6% of Oregon’s total exports to Canada. Machinery; except electrical (14.6%) and wood products (9.0%) were the second and third largest Oregon exports to Canada.

As was the case with Canada, Oregon’s largest export to Mexico was transportation equipment, though it was roughly one-eighth ($108.1 million) of what was sold in the Canadian market. Transportation equipment accounted for 19.3% of Oregon’s total exports to Mexico. Machinery; except electrical (14.7%) came in second. Electrical equipment; appliances and components (11.9%) took the third slot.

China, the third largest export partner of the United States, purchased 8.6% of the nation’s exports at a value of $151 billion. Unlike the export market in Mexico, the market in China is more evenly distributed among the states. Texas (14.0%), California (11.1%), and Louisiana (8.1%) held the top three spots. Oregon was the fifth largest exporter to China (also trailing Washington) and found the market particularly favorable. Oregon supplied 7.0% of China’s imported U.S. goods and services in 2021, and at a value of $10.6 billion, China’s business purchases represented 36.0% of all Oregon exports.

China may have ranked third for the U.S., but the country ranked as the top export market for Oregon; Canada was the second largest market with Malaysia rounding out the top three. Canada and Malaysia purchased 11.0% and 7.5% of the state’s exports, respectively. Mexico was 11th on Oregon’s list, purchasing 1.9%.

Malaysia may have ranked 23rd in U.S. export purchases, but the country was high on Oregon’s list. The country purchased 7.5% of the state’s exported goods and services worth $2.2 billion. Malaysia’s top interest was computer and electronic products, which represented 90.5% of the country’s imports from Oregon, totaling $2 billion. Waste and scrap (3.4%), and machinery, except electrical (1.6%) were the second and third most sought after products. Malaysia’s top three imports accounted for 95.5% of the country’s imports from Oregon.

China Is a Top Destination for Top Three Oregon Exports

Computer and electronic products has been Oregon’s number one export since at least as far back as the International Trade Administration’s online database goes (1999). In 2021, computer and electronic exports represented 49.3% of the state’s total exports, fetching $14.6 billion in revenue. China purchased more than half (55.4%) at a price tag of $8.1 billion. Computer and electronic exports represented the vast majority (76.0%) of products sold from Oregon to China. Machinery, except electrical (7.8%), transportation equipment (4.7%), agricultural products (4.5%), and chemicals (4.0%) made up the bulk of the state’s remaining exports to the country.

Malaysia, Israel, and Vietnam also took a solid interest in computer products. Altogether, Malaysia, Israel, Vietnam, and China accounted for 83.3% of Oregon’s computer and electronics export market. Israel became a major buyer for Oregon in 2021, purchasing $1.2 billion worth of computer products, a $1.1 billion increase over the country’s typical annual purchase. Oregon’s remaining computer and electronic exports were split between 147 countries, and ranged from Ireland’s $414.6 million purchase to the $2,700 purchase from Bosnia and Herzegovina.

Machinery; except electrical products was Oregon’s second largest export in 2021. Machinery exports represented 14.4% of the state’s total exports: a value of $4.3 billion. China was also the state’s top export market for machinery. South Korea was a close second. China took in 19.4% of Oregon’s machinery exports at nearly $828 million while South Korea purchased 17.4% at $740 million. Taiwan purchased 15.9% and Canada purchased 11.2%.Together these four countries accounted for 63.9% of Oregon’s machinery exports. The remaining portion went to 137 countries and ranged from Singapore’s $266.7 million purchase to Macau’s $2,850 purchase.

Exports fall into many categories. They can be mined or extracted, grown or raised, intellectual property or services, or even recycled goods. More than 90% of Oregon exports, however, are manufactured goods. It might be easy to overlook manufacturing’s part in Oregon’s economy.

Many manufacturers are small and they aren’t as prevalent as other businesses. Just 3.9% of firms (6,327) in Oregon’s private sector were classified as manufacturing in 2021, averaging the first three quarters. In comparison, education and health services, and professional and business services, each had over 27,000 firms in 2021; and retail trade, and leisure and hospitality each had over 13,000 firms. These four industries along with manufacturing made up Oregon’s top five industries by employment.

Manufacturing, with its relatively small number of firms employed 11.6% of the private-sector workforce. At 185,414, this was slightly above leisure and hospitality’s 10.6% and slightly below retail trade’s 12.9%. While manufacturing had roughly 100,000 fewer jobs than education and health services, and roughly 60,000 fewer than professional and business services, the industry paid $10.6 billion (14.5%) of the private sector’s $73.5 billion payroll. This was close to the $12.2 billion payroll (16.6%) of education and health services and two-thirds of the $16 billion payroll (21.7%) of professional and business services. This was also nearly twice the payroll of retail trade and more than three times the payroll of leisure and hospitality.

Computer and electronics manufacturing accounted for 37.7% of manufacturing’s total payroll and its contribution to the economy is larger still. Oregon’s annual Gross Domestic Product for 2021 won’t be available until April, but quarterly annualized estimates from the Bureau of Economic Analysis put the state’s 2021 private-sector GDP at roughly $228 billion. Goods producing industries such as manufacturing, agriculture, forestry, and mining represented 23.6% ($53.8 billion) of the state’s private-sector GDP in 2021, according to the BEA. Manufacturing alone accounted for 15.9%.

Traded sectors are considered the backbone of the economy for a good reason. The exchange of goods and services produced in one place and sold in another allows for specialization and beneficial excess production. Selling goods and services outside of the local market brings excess money into the local economy.

Traded sectors also pay wages to their local workforce, which directly affects real estate through rents and home sales, and fuels local businesses in non-traded sectors such as retail trade, leisure and hospitality, and education and health services.

As a side note, sub-industries or even individual businesses within these three traditionally non-traded sectors can be considered tradable under certain circumstances: a hidden traded component.

Christopher Rich is a senior economist with the Oregon Employment Division. He may be reached at 541-519-0315.

Do you support the Supreme Court decision last week overturning Roe vs Wade?

Prepare, be aware and stay safe while exploring Oregon's outdoors

Prepare, be aware and stay safe while exploring Oregon's outdoors

Independence Day is for freedom, fun – not forest fires

Guest Column: Dispatch From the Wave

Independence Day is for freedom, fun – not forest fires

Guest Column: Dispatch From the Wave

Tech Tuesday: Building a Defense with Summer Safety Tips For Parents and Kids

We're always interested in hearing about news in our community. Send us your news, photos, and videos and let us know what's going on!