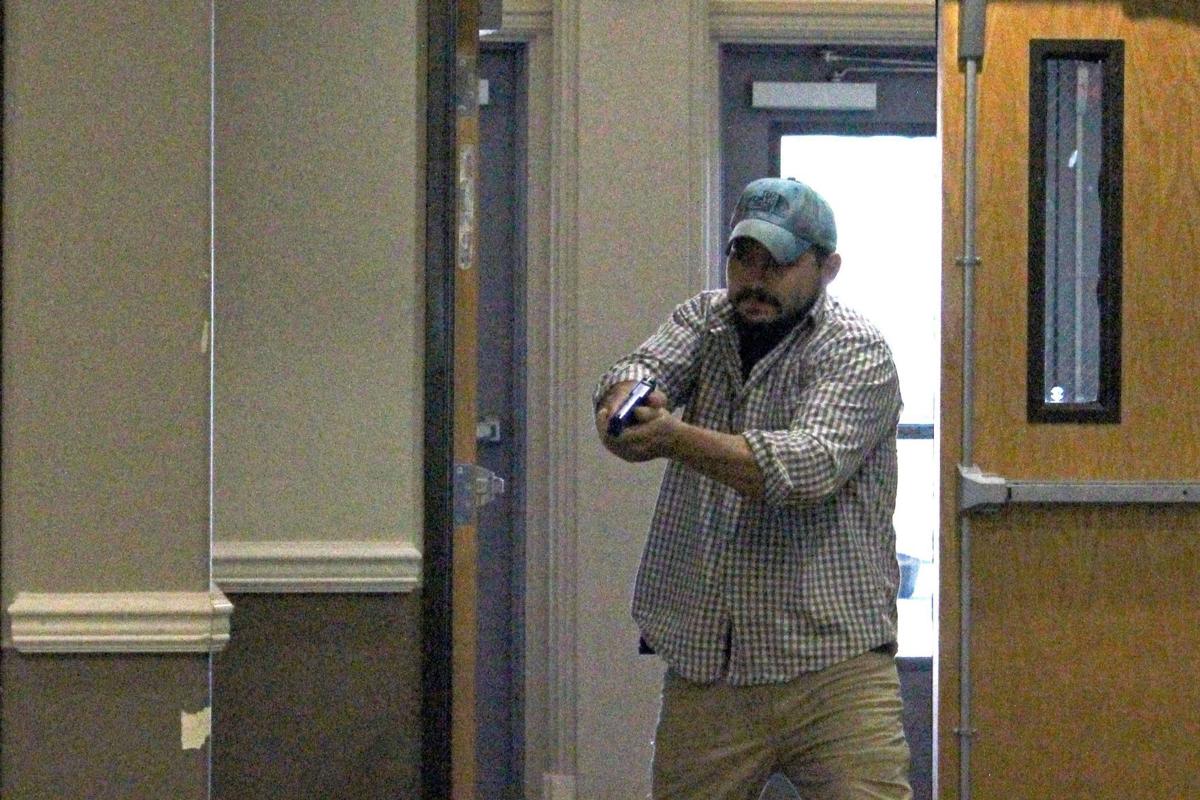 A shooter enters the room during ALICE training this past fall. 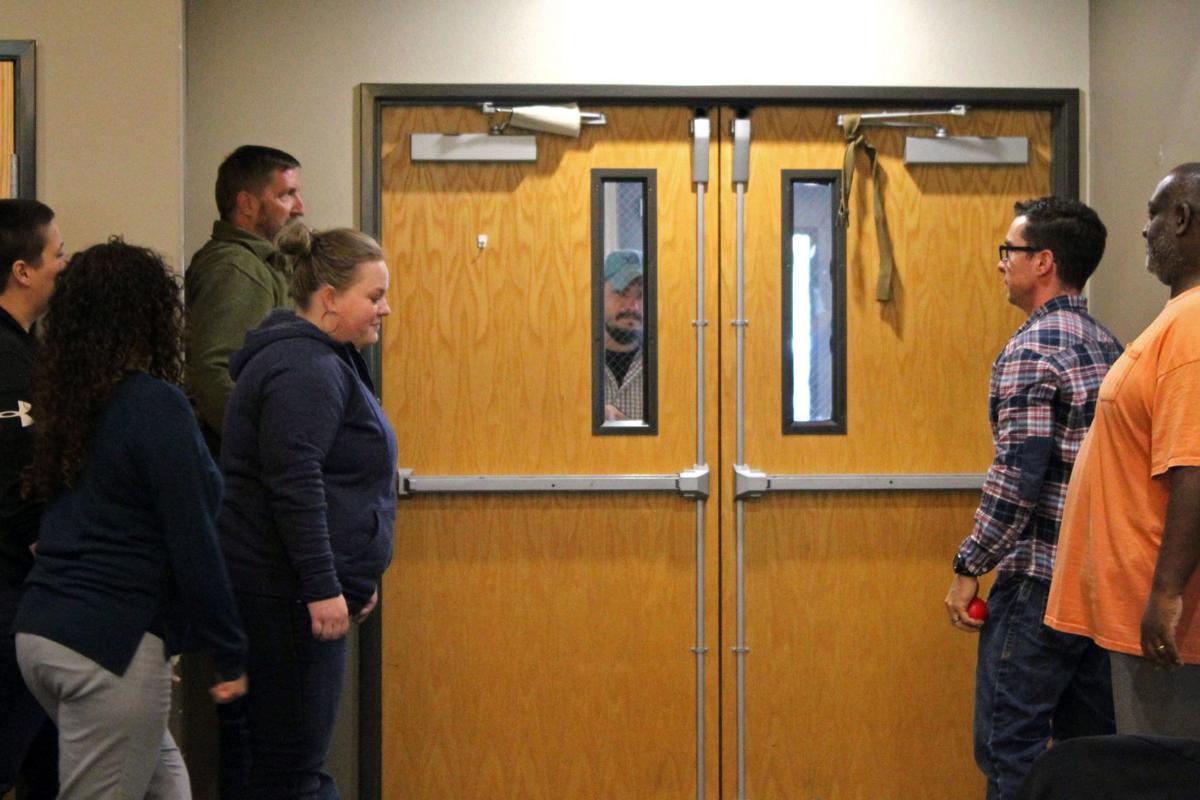 A group blocks the door from being opened as the shooter tries to get in. 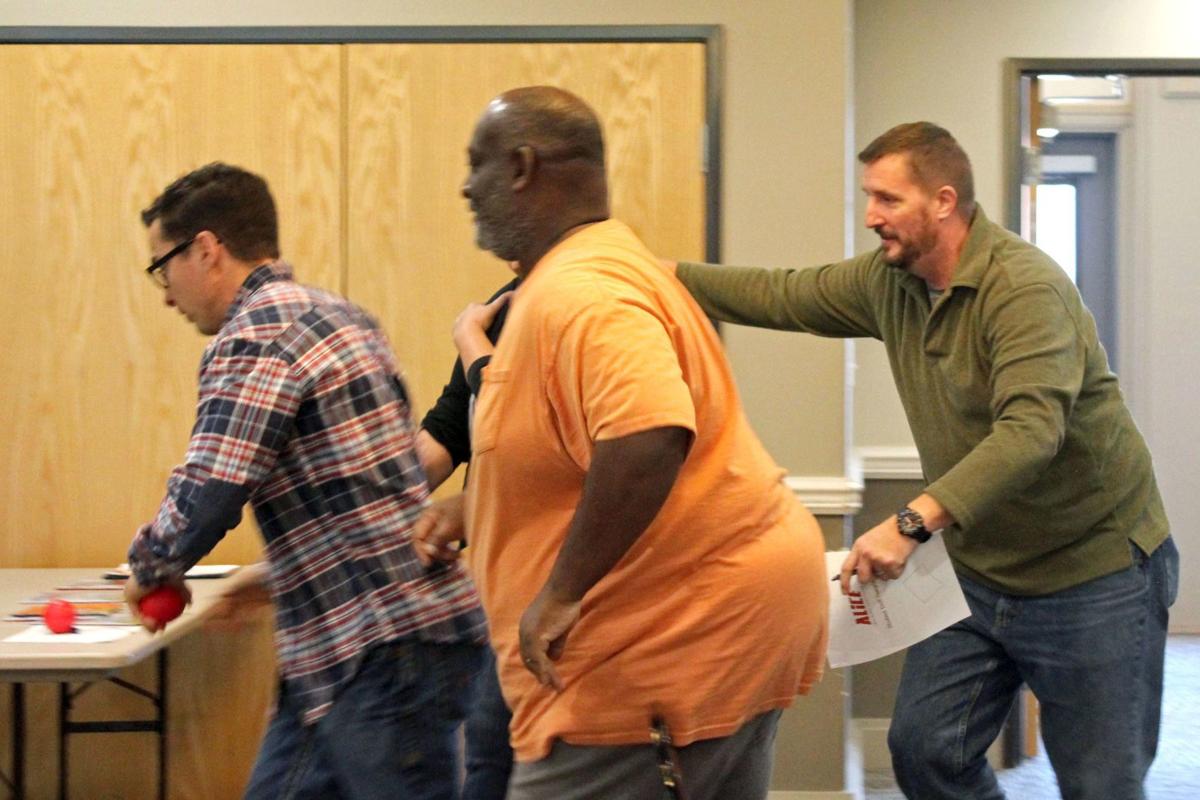 The group runs to another door as part of an evacuation plan. 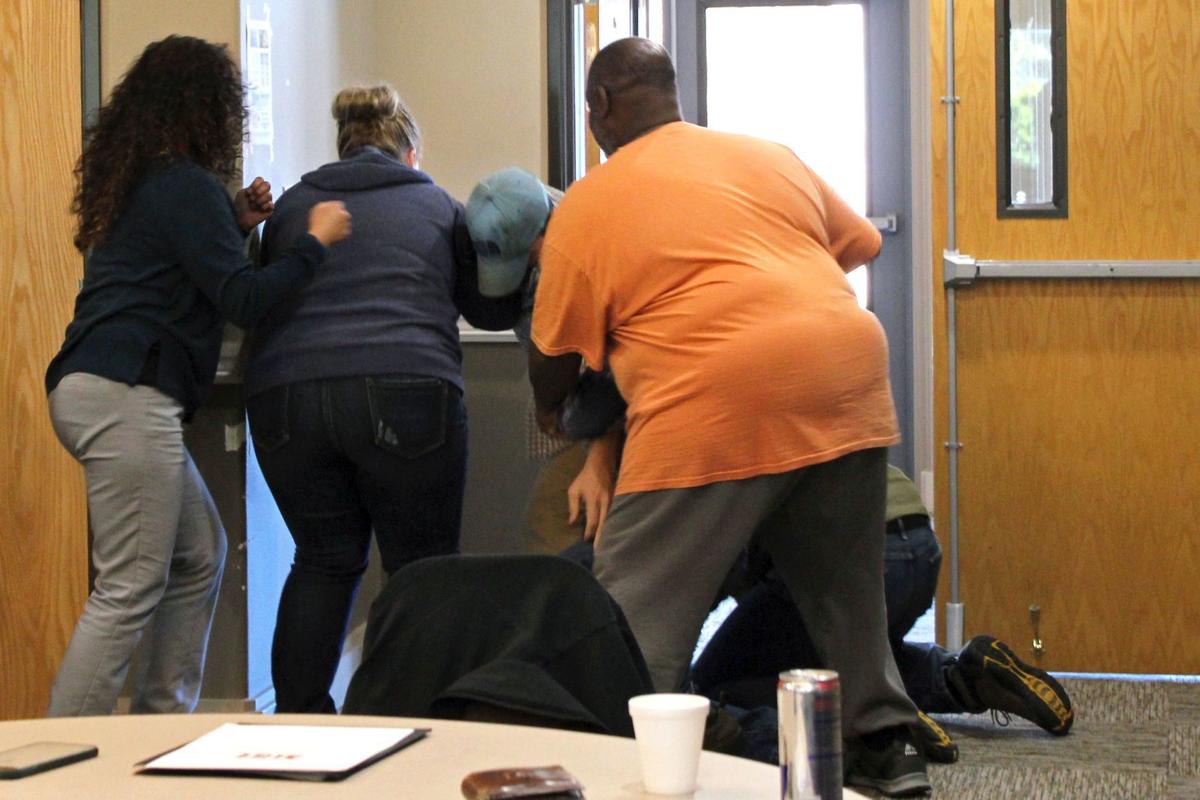 The group ambushes the simulated shooter. 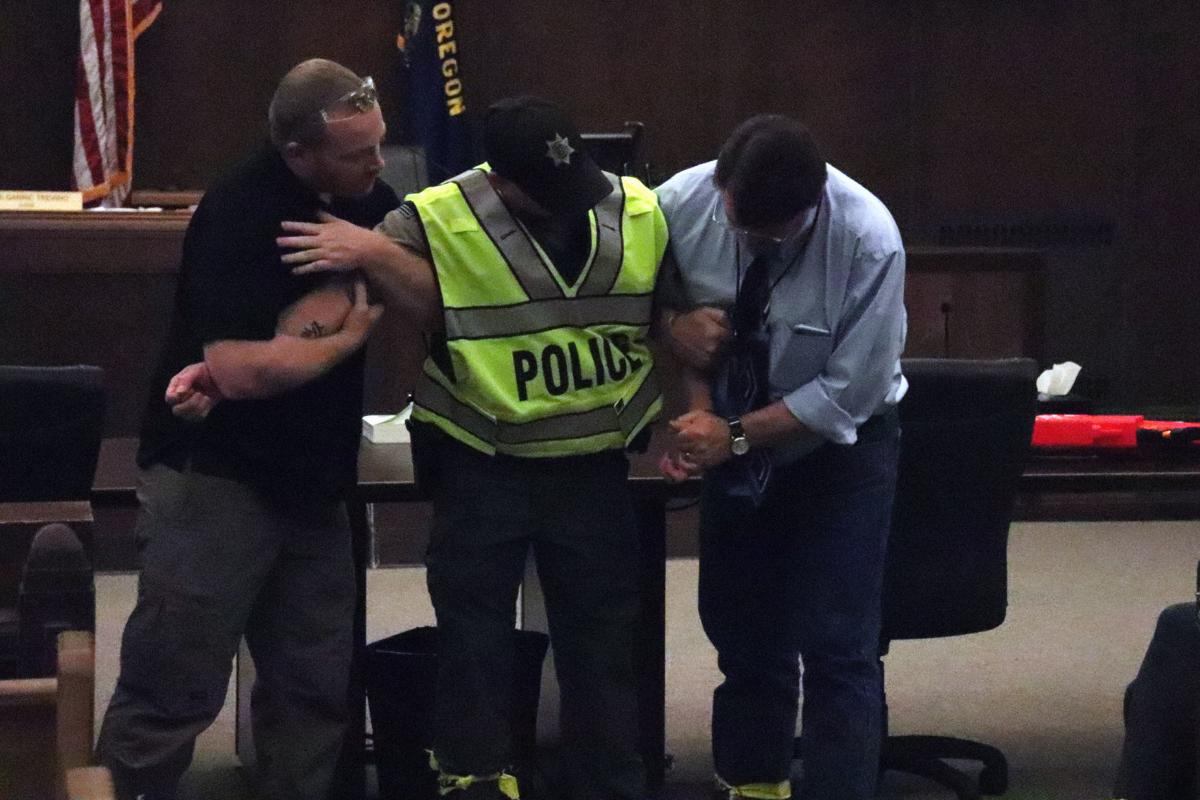 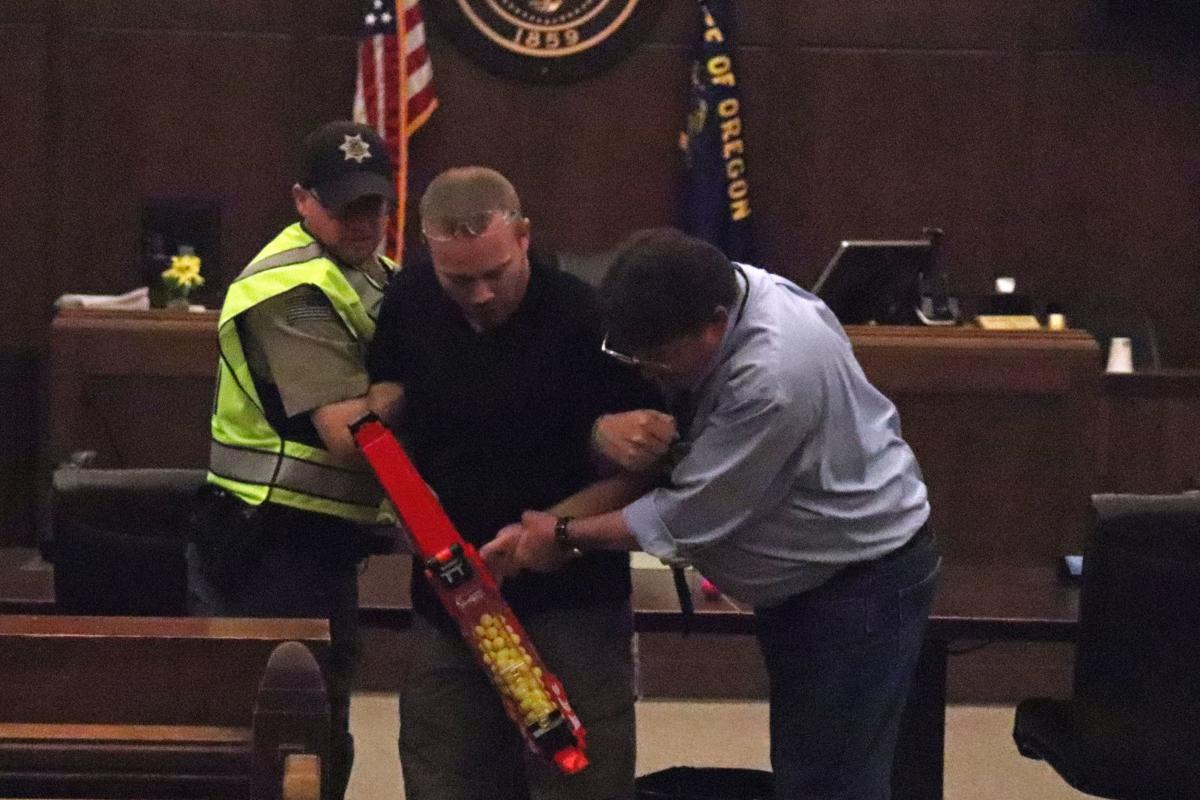 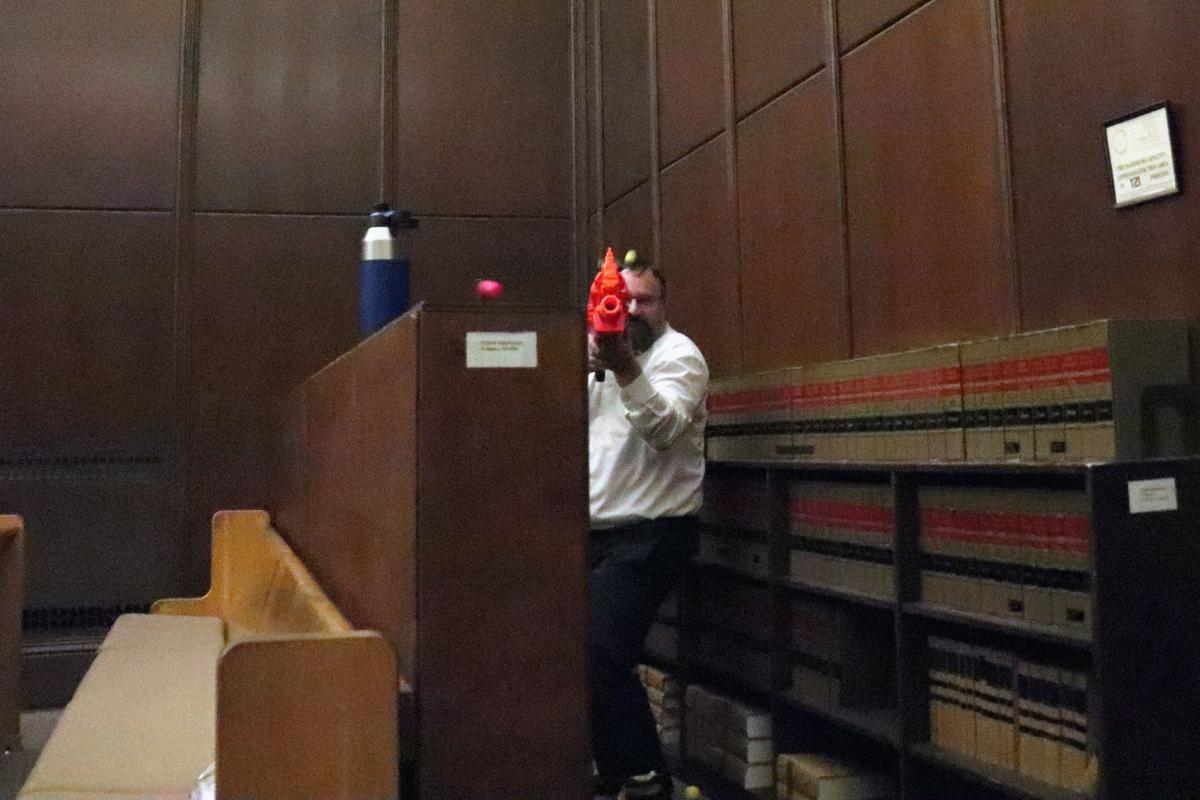 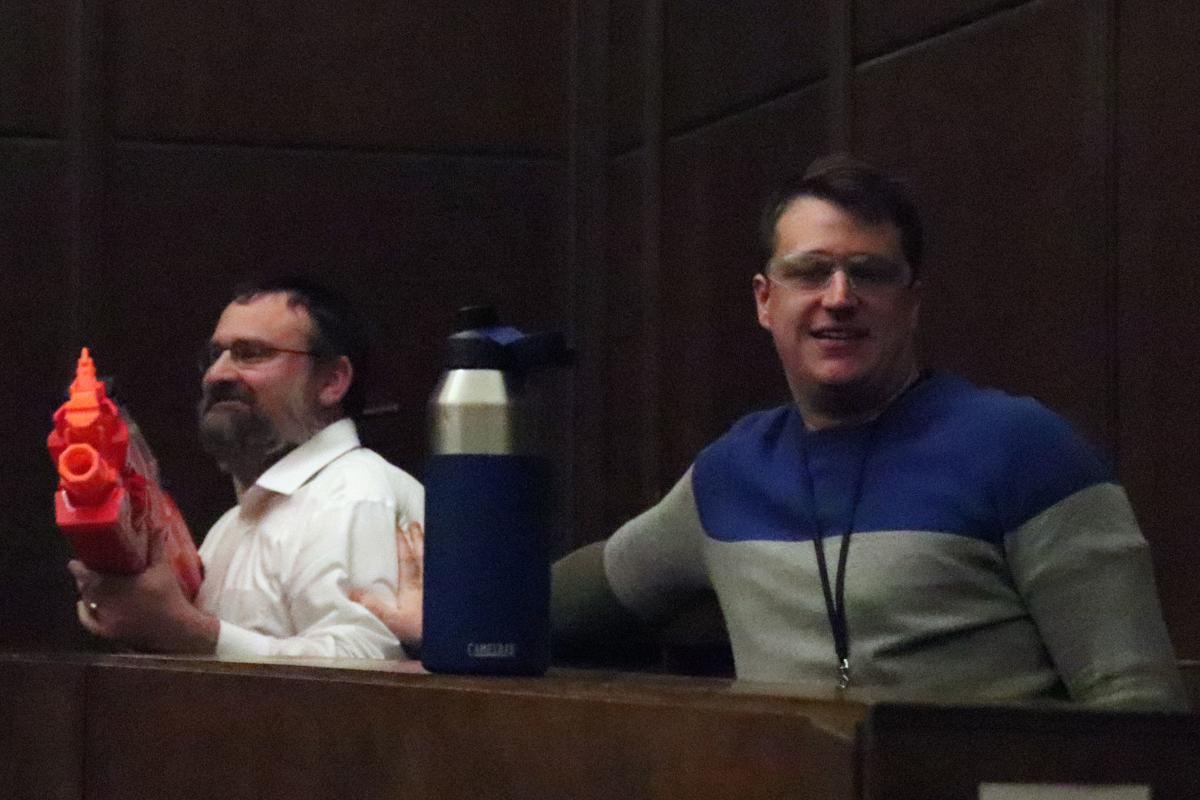 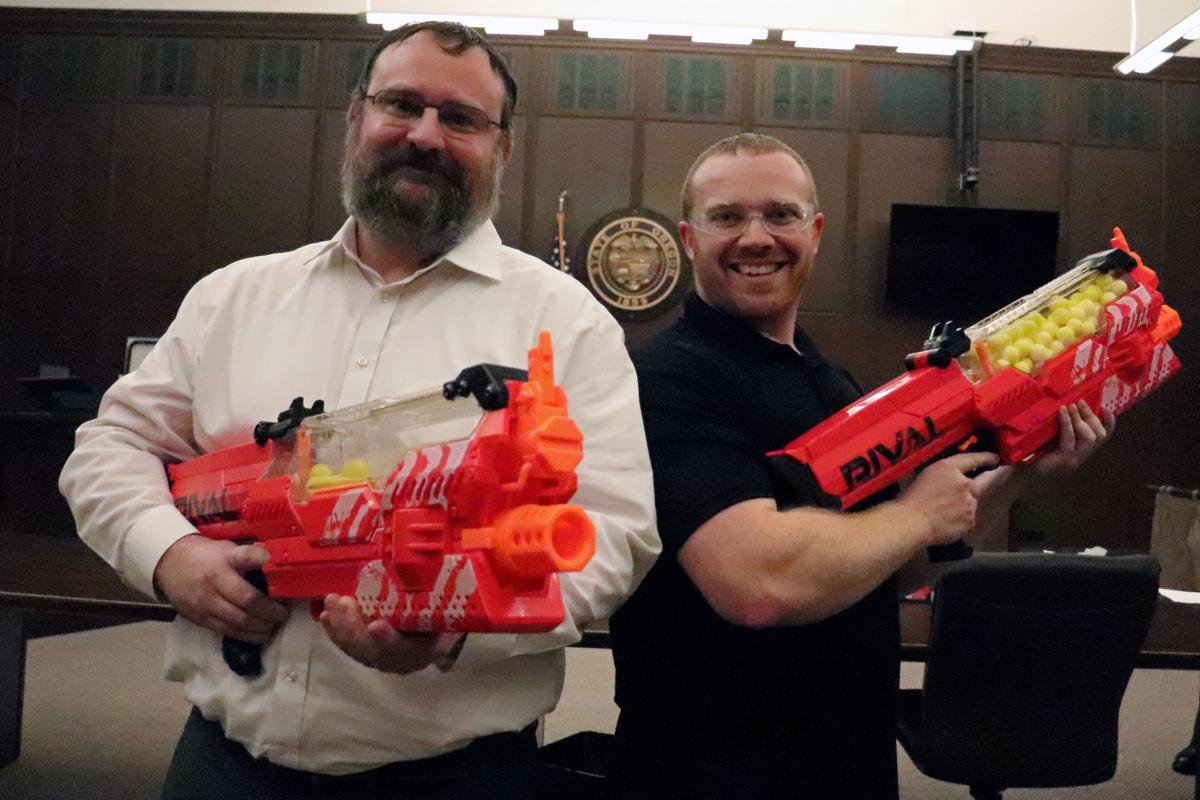 A shooter enters the room during ALICE training this past fall.

A group blocks the door from being opened as the shooter tries to get in.

The group runs to another door as part of an evacuation plan.

The group ambushes the simulated shooter.

In dangerous situations where seconds count, training could be a lifesaver.

Organizations across the nation and right here in Tillamook are using ALICE (Alert, Lockdown, Inform, Counter and Evacuate) training to prepare for violent attacks. A training session for county employees was held at the Tillamook County Courthouse on Tuesday, Feb. 4.

This past fall, Tillamook Police Department arranged to host a local ALICE training session for employees of Tillamook and Nestucca school districts, Tillamook Fire District, Tillamook County Sheriff’s Office, Near Space Corporation, and City of Tillamook as well as private and public sector employees from outside the area. It had been some time since a training was held in the region.

Tillamook Police Detective Nick Troxel said ALICE training provides the necessary skills for anyone who might be caught in a violent encounter such as an active shooting. The training teaches people that there are options in how people respond to a violence, armed or otherwise, wherever an incident occurs. It could be as simple as knowing an escape route or as serious as standing up to fight.

The courthouse training session was held for the county and state employees who work there. Troxel was joined by Sheriff’s Office Deputies Mike Reeves and Jacob Howitt, who attended the fall training session. Troxel said county staff wanted ALICE training in the courthouse, having had that opportunity two years prior. More than 40 county staff members participated between the morning and afternoon groups and will carry the lessons back to their departments.

The training involves classroom-style learning as well as live scenarios. After studying the principles of ALICE, the scenarios pitted the students against a mock shooter carrying a Nerf blaster that is fully automatic with fair range. The scenarios progressed from lockdowns to evacuations to fighting back, giving participants an idea of what to expect in different cases.

In one run through, a totally inexperienced shooter devastated the crowd. In most scenarios, Howitt acted as the shooter, showing how deadly accurate fire from a trained shooter could be, and also the need for tightly secured barricades. As Howitt probed for entry points, county employees tossed tables and chairs in front of doors and lashed their belts across mechanical door arms to block entry.

In a final test, a shooter from within the room – Tillamook County Deputy District Attorney Jeremy Dietrich – was taken down with thrown objects (foam balls) and swarming tactics, but not before he did significant damage. It was the brave actions of Tillamook County Housing Coordinator Jake Davis that ended the simulated foam-flinging rampage as Davis closed the distance on Dietrich and executed the swarm technique successfully.

Troxel said law enforcement in the past took the wrong approach to preparing people for violent attacks. While firefighters advise people to evacuate from dangerous situations, law enforcement’s philosophy had been to shelter in place and wait for help. Troxel finds the notion of being protected from a shooter by hiding under a desk is questionable at best.

“It’s retraining an entire generation – multiple generations – to a different way of thinking,” Troxel said. “We don’t want to be setting up our community members for failure, we want them to survive.”

If you find yourself in violent circumstances, Troxel said you should get to a safe area, alert others to the danger and contact authorities immediately. And it’s not just mass shootings; dangerous situations could involve other weapons and could arise due to anger, domestic conflicts or mental health issues. Nearly anything could be used as a weapon, making awareness a key aspect of being safe.

Prior to instituting ALICE, Tillamook Police Department relied on teaching standard lockout and lockdown practices, securing doors and windows, and hiding until the scene was secured by law enforcement. Statistics indicated more than half of active shooter incidents end before authorities arrive. ALICE focuses on awareness, preparation, prevention and response.

“We are here to teach students how to be successful in life, and we’re preparing our students for life,” Troxel said. “This is a life skill that is super important to have.”

Troxel said option one should always be to evacuate. If there is no escape, barricade yourself in, stack whatever you can against the doors. There are a number of innovative locking devices, some of which have been installed in Tillamook High School. If the barricade fails, counter-attacking and swarming tactics are next – maybe you shout and throw something at the attacker or run unexpectedly.

If you happen to take down a violent attacker, don’t touch any weapons they might have. Keep your eyes on them, but do not pick them or try to make them safe. If you’re carrying a weapon, put it away and keep your hands visible for authorities to help determine who at the scene might be a threat. Be calm and communicate clearly in what could be a hectic, loud situation.

Troxel said ALICE has proven itself to be effective. He referenced the Virginia Tech shooting in which statistics showed actions of running or fighting increased survival dramatically over sheltering in place.

Those who are interested in the details of arranging ALICE training for an organization or agency should contact Detective Nick Troxel at Tillamook Police Department (503-842-2522) or Deputy Mike Reeves at Tillamook County Sheriff’s Office (503-842-2561.

Over the past several years, we have seen a dramatic increase in school shootings. As the experts analyze these horrific events, it has become…