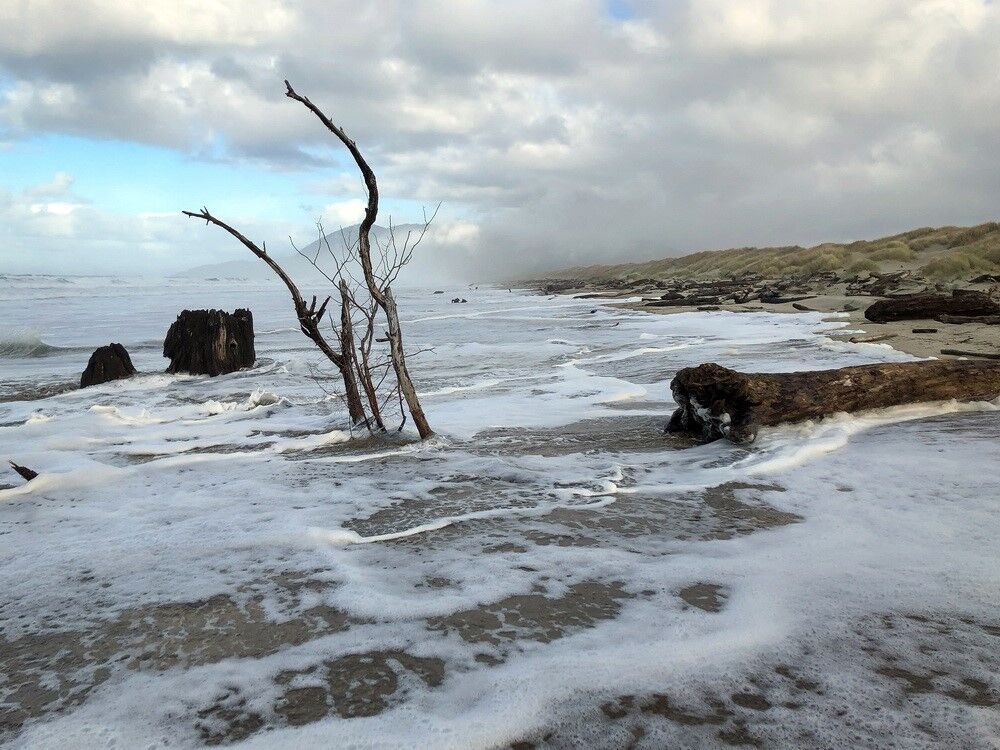 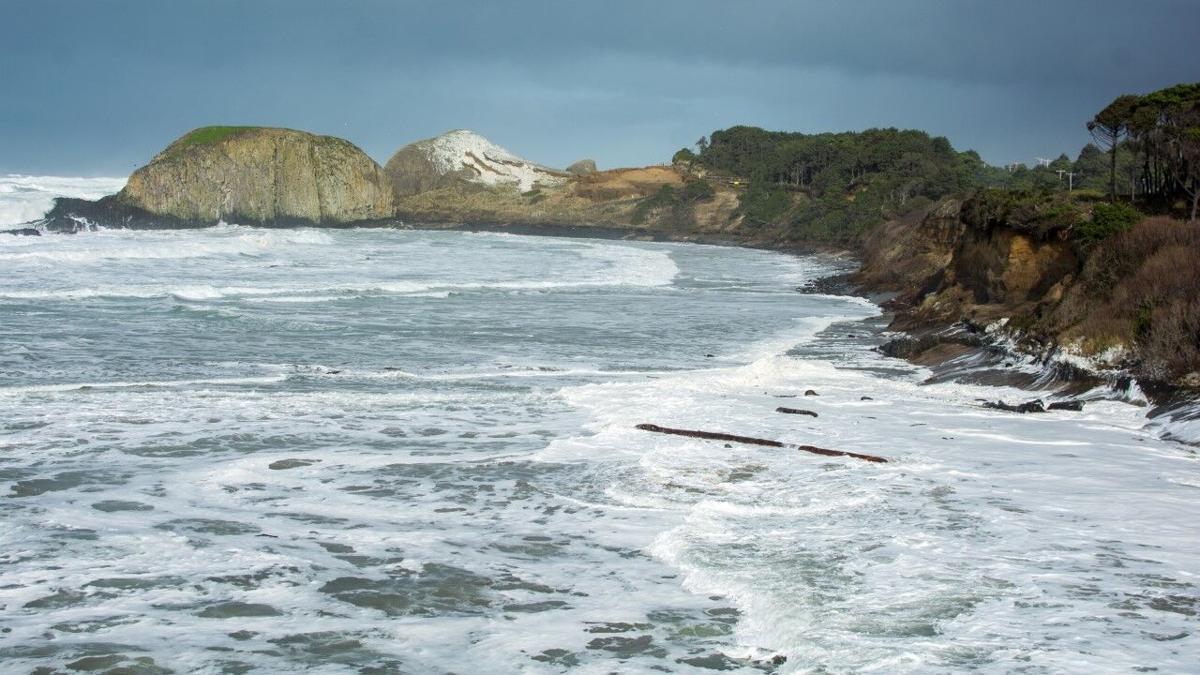 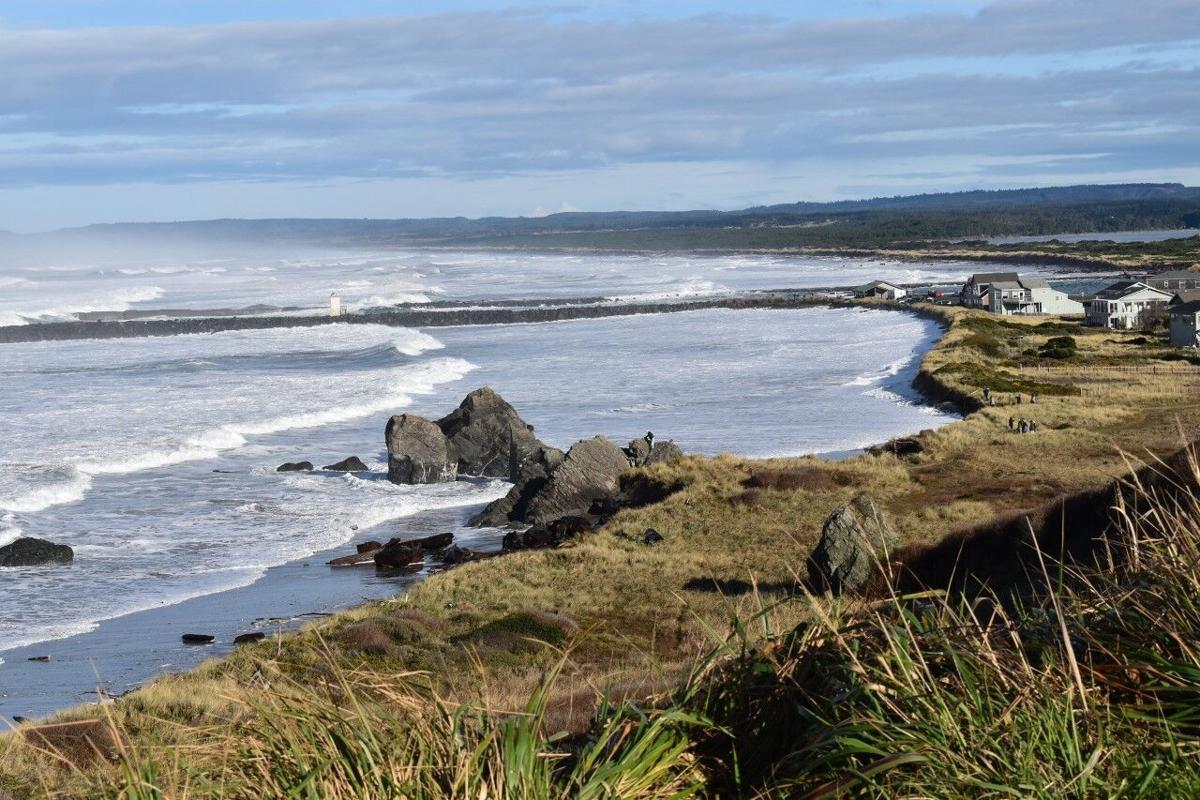 Every year in early winter, high tides on the Oregon coast are higher than usual. These extreme high tides, commonly called “King Tides,” occur at a few specific times during the year when the moon’s orbit comes closest to the earth, the earth’s orbit is closest to the sun, and the sun, moon and earth are in alignment, thereby increasing their gravitational influence on the tides. These tidal events are also known as perigean spring tides.

And every winter for the past decade, a growing network of volunteer photographers has documented the highest point reached by these highest of tides. The hundreds of photos they take capture a moment in the interaction between land and sea which up till now has been rare, but is likely to become far more typical. The images reveal current vulnerabilities to flooding. Even more important, they help us visualize and understand the coming impacts of sea level rise (such as flooding and erosion) to coastal communities. These tides are especially important to document when storm surges and high winds and waves create even higher water levels.

The volunteer photographers are participating in the King Tides Project, the Oregon branch of an international grassroots effort to document coastal areas flooded by the highest winter tides. It started in Australia (where such extreme high-water events are called “king tides,” hence the name). In 2009, the highest tide in over 18 years was predicted there. Australians organized a photo event to document the effect of the tide on low-lying areas; the first-year project received more than 2,000 photographs. In 2010, West Coast states, including Oregon, began to document their king tides. In 2012, the project spread to the East Coast and continues to expand today.

Here in Oregon, the King Tides Project has been developed and coordinated by the CoastWatch Program of the Oregon Shores Conservation Coalition, and the Oregon Coastal Management Program, and branch of the Department of Land Conservation and Development. From modest beginnings, the project has grown to the point that more than 100 volunteer photographers contributed more than 400 photos to the project’s archives last winter.

The goal of this citizen science project is to encourage Oregonians and visitors to submit photos they take of the king tides to help track sea level rise over time and reveal its impacts on the Oregon Coast. The value of the project thus increases over time, as the record of changes caused by higher tides lengthens. Photographers are also encouraged to take photos at average high tides from the identical vantage points of their “king tides” shots, for purposes of comparison.

Anyone can participate by taking a photo during the peak period of a king tide, anywhere on the outer coast or along estuaries or lower river valleys. Photos that show the highest stand of the tide with reference to a man-made structure or natural feature reveal the reach of the tide most clear. Participants then submit their photos through the project website (www.oregonkingtides.net). For the 10-year anniversary of the project, a fantastic interactive web display was created to highlight the initiative through time. Many other partners support the project on-the-ground, such as watershed councils, non-profit groups, tourism groups, and public ports.

Long-term monitoring is often an under-supported part of research and management. This project offers a unique opportunity to see change through time, while also giving a better understanding of what sea level rise might look like in our own backyard. For example, Oregon’s King Tides photos have been used by agencies and researchers to ground truth important scientific models that are used to estimate where the high waters will reach and how they will impact the places we love. This helps build trust in these models and validate our understanding of what our coast will look like under changing conditions. A picture is worth 1,000 words, and King Tides photos highlight how a rising sea or increased storm surge may impact familiar places in our communities.

King Tides can impact the Oregon coast in several ways. High water levels can cause increased erosion on the beaches, which can lead to decreased beach access (smaller beaches), vulnerable structures and infrastructure, and dangerous beach conditions. Additionally, some communities experience coastal flooding from unusually high tides. The City of Nehalem, for instance, experiences frequent flooding along its downtown corridor, which impacts travel and access to the main highway (Highway 101) as well. Agricultural lands along the Coquille River or Tillamook Bay also experience frequent flooding during high tides or heavy rains. The interactive web display mentioned above also highlights a few of Oregon’s estuaries and how they may be impacted by sea level rise in the future.

The information gathered can help to guide land use regulations that can be an important component in strategies to decrease tidal impacts to coastal infrastructure, such as appropriate oceanfront or riverine setbacks, moveable development, and stormwater management. Additionally, protecting open space, vegetative buffers, and migration zones for wetlands are also important considerations for areas particularly prone to flooding or erosion and other climate change impacts. Planning for coastal hazards and sea level rise impacts now will help to prevent haphazard and reactionary management decisions in the future.

To get a better view of the project, browse the King Tides photo albums by season: https://www.flickr.com/photos/orkingtide/albums. You don’t have to be a scientist to understand and help to document how sea level rise may impact places in our own communities. Of course, all participants are urged to take photos from a safe location, and to avoid putting themselves in danger while taking and submitting pictures.

The Oregon Coastal Management Program (OCMP) is a networked program of coastal cities, counties, and state agencies working to protect Oregon’s estuaries, shorelands, beaches and dunes, and ocean resources. The OCMP supports the implementation of the National Flood Insurance Program, which helps communities protect against the impacts of flooding. Additionally, the Program supports development standards that incorporate the best available science and management practices to protect coastal resources and limit development in hazardous areas.

CoastWatch, a project of the non-profit Oregon Shores Conservation Coalition, organizes hundreds of volunteers who adopt one-mile segments of the Oregon shoreline, monitoring these stretches of coast for both natural changes and human impacts. CoastWatch also organizes a number of citizen science projects, including the King Tides Project.